 Reminder that your membership renewal is due on June 1, 2013 and renewal forms are now available at the club house and on the clubs website – www.ennistennis.ie

 It is important to note that you are asked to return your key together with your Membership Renewal Form, please put both in an envelope marked for the attention of Ann Twomey, Membership Secretary & place in letter box at top of stairs.

 The key will be re-cut and sent back to you with your Membership Card. This process will take a few days during which time we ask for members’ patience.

Posted by News from the Clubhouse at 17:33

St.Flannan's U14 and U16 Teams were narrowly defeated in their Munster Junior Tennis Finals. The U16 team was Douglas Reddan, Mark Duffy, Nathan D'Arcy and Sean Collins. The U14 Team was Conor Brannock, Maywa Ajijohn, Jack Duffy and Kevin O'Connor. The Ennis National Girls team also were narrowly defeated in their Munster Final. The team was Rhona,Edith and Shauna Kearney, Katie Browne and Eimear Kilroy. All these teams are coached by Danny and Jason Comerford with help from Mary Francis D'Arcy, Michael Horgan and Adrienne Brannock. Steve McCarthy the President of Munster Tennis presented the prizes. 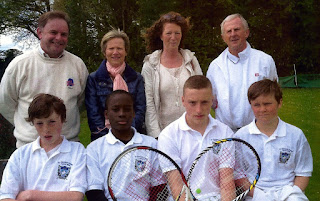 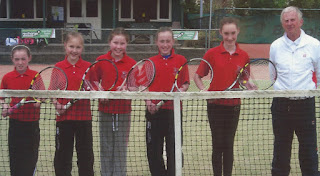 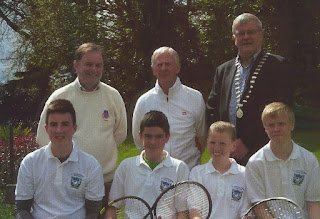 Posted by News from the Clubhouse at 07:18

Colaiste Muire won the Munster U14 Schools Title held in Rushbrooke. The team was Chris Kearney, Karen MacNamara, Lana Browne and Emily Lester. The team is coached by Danny and Jason Comerford. Steve McCarthy the President of Munster Tennis presented the prizes. 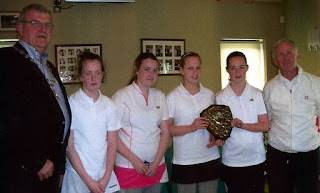 Posted by News from the Clubhouse at 19:42

Renovations to the Dressing Rooms Completed

The renovations to the dressing rooms are now completed. A new corridor has been constructed to allow direct access to the dressing rooms without having to cross the badminton courts. New radiators,toilets and a new boiler have also been installed. Special thanks are due to our Chairman John Jennings and Secretary Ann O'Hanlon.
Posted by News from the Clubhouse at 09:00

Friday 12th July
8pm: Launch of the book on the History of the Club at the Old Ground Hotel.

Sunday 14th July
1pm: Vintage Tennis Tournament & BBQ. All competitors who wear old fashioned gear will be entered in a competition for the best dressed player!! 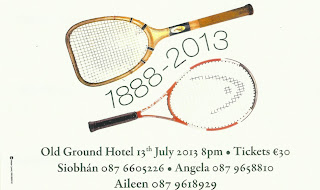 Posted by News from the Clubhouse at 08:40

The Ennis National School girls team progressed comfortably to the semi-final 0f the Munster Schools Tennis Championships after their victory last Monday in Douglas in Cork. The team who are all club members was Shauna, Edith and Rhona Kearney and Katie Browne.
They are coached by Jason and Danny Comerford. The semi-final will also be in Cork soon. Best of Luck.
Posted by News from the Clubhouse at 06:48

Ireland finish 3rd in U15 Quadrangular. Moya in the Mixed Final 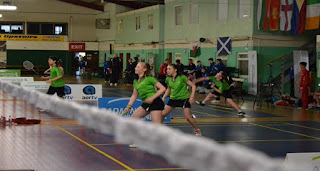 Despite a fighting display by a young English side, Scotland retained the U-15 Quadrangular title in Baldoyle today (Fri).Ireland finished a fighting third, beating Wales 6-3 in their final match. Earlier in the day, the Irish had been unlucky to lose a couple of three setters in their match against the English. Against Scotland, Matthew Lightbody and Moya Ryan pulled off a notable victory in the mixed doubles after dropping the middle set.

In the individual events Matthew Lightbody and Moya qualified for the final of the mixed doubles on Sunday 5th May. After a good win over England's Huang and Wijetunge, the Irish pair had a tougher outgoing against Scottish pair Grimley and O’Donnell in the semi-final, dropping the middle set, but holding on to win 21-18 18-21 21-18. They faced another Scottish pairing Alex Dunn and Holly Newall in the final which they unfortunately lost 21-16, 21-16. In the singles the best of the Irish girls was Moya who reached the quarter finals.

This is the sixth in the series which started in 2008 when Ennis won the inaugural event. Every year since it has gone with home advantage. The score in the series is now 3-3. Last Sunday Killaloe won by a score of 124-98 points. Some great tennis was played with Ennis winning all the straight doubles in Round 1 but unfortunately we lost all our mixed and the Killaloe Juniors were too strong for the valiant Ennis Juniors.