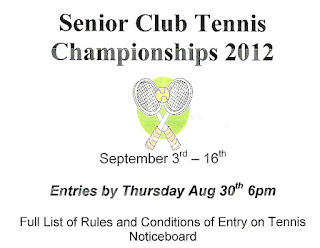 The closing date for the club senior tennis championships is this Thursday 30th Aug. at 6pm.The draw will be made later that evening and will be available on the club noticeboard on Friday Evening.
The schedule for Monday and Tuesday Sep 3/4 will be initially published by Saturday Sep 1st.
It is imperative that all members check the match schedule.
Members will not be personally informed when they are due to play. It is up to each competitor to check their own schedule.
The champoionships are sponsored by the Cassidy Family who were integral in the formation of the Fergus L.T.C. which preceded our current club.
Posted by News from the Clubhouse at 20:44

Its that time of year again. The badminton season begins this Monday 3rd September with a meeting of all badminton players at 8pm at the club to plan for the season.
Grading, affiliation, coaching, challenge match's, up coming competitions, club open nights, blitz nights, block booking and Team Training Nights will be discussed.
Former International and top coach Will O'Neill is available for senior coaching on Monday and Tuesday nights from 8 to 10 pm. A six week course starting on the 10th September will cost €36 (lights and shuttles included). Contact Badminton Captain Niall Thornton njthornton@eircom.net if you are interested. The coaching is for all levels from beginners to Div 1.
Posted by News from the Clubhouse at 20:31

Club of the Year Weekend

The prize for winning the Club of the Year Award was a weekend in the Dublin Hilton for 11 top juniors with coaching from the National Coach Dan Magee, and the Coaching Coordinator Ben Caldwell at the excellent Marino Institute. Nine adults also came and played in a fun blitz after the training on Saturday. This was followed by bowling at a local leisure centre, and completed with a badminton quiz!!

Even Olympian Chloe Magee joined us on Sunday morning to feed some shuttles!!!
Badminton Ireland national Coach Daniel Magee Commented "Fantastic to see such enthusiasm towards training, this combined with all the hardwork over the year by all involved with the Club has made Ennis a very worthy recipient of the BI Club of the year award"
Posted by News from the Clubhouse at 20:15

Email ThisBlogThis!Share to TwitterShare to FacebookShare to Pinterest
Labels: Club of the Year Weekend 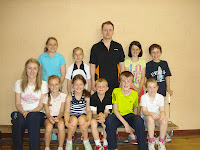 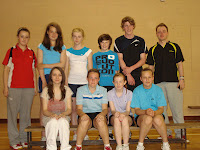 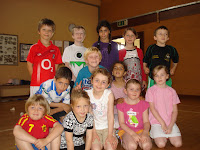 Over 30 juniors ranging in ages 5 to 15 attended the Junior Badminton Summer Camp which took place on 13th,14th & 15th August.
The camp which was run in association with Badminton Ireland was coached by Will O'Neill & assisted by Sinead Flynn & Amy MacNamara.
Well done to all who took part.
Posted by News from the Clubhouse at 19:49

Teicnic Badminton is a new coaching initiative from Badminton Ireland which focuses on the technical progression of players during key stages in the development of their game. Teicnic Badminton has seven levels, starting at a basic white level, followed by yellow and on eventually to the advanced black level. Last Sat.18th Aug Ben Caldwell from Badminton Ireland presented one white and two yellow courses with over 30 participants.
Posted by News from the Clubhouse at 17:37

Nenagh Junior Open:
Pictured here are a number of participants from the recent North Tipperary Junior Open at Nenagh LTC. Picture includes Karen McNamara, Chris Kearney, Rhona Kearney, Edith Kearney, Shauna Kearney, Niamh O’Shea and Jason Comerford (Junior Tennis Captain). Missing are Nathan D’Arcy and Stephen Keane. A special congratulation is reserved for Rhona, who was crowned the U9 Girls Champion at the event.
Galway Junior Open:
Ciaran O’Brien and Michael McMahon both competed in the recent Galway Junior Open,  with both reaching the semi-final of their singles competitions (Ciaran at u-16, and Michael at u-18), before teaming up to finish as beaten semi-finalists in the u18 doubles.
Community Games: 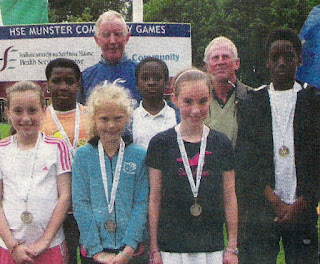 Two teams representing Ennis St.John’s, and comprised of members from our club participated in the Munster Finals of the Community Games. This year marks the final year of U-16 competition at this event, and from next year it will be an U-13 only event.
This year, our U13 Team finished a commendable second – just missing out on qualification for the All-Ireland series of the event, while our U-16 team were edged out in the semi-final stage by last year’s champions Blarney.
U-13 Team:  Emily Lester, Shauna Kearney, Emila Kovale, Mayowa Atijohn and Tommywa Atijohn.  U-16 Team: Nathan D'Arcy, Nick Lester, Stephen Keane, Karen McNamara, Chris Kearney and Niamh O’Shea.
Parks Tennis:
This year, Parks Tennis recorded an increase in participants relative to last year, with the registration closing early in the second week. In total, in excess of 140 young people participated in the programme.