This may bank holiday weekend four members of the club played the West of Ireland tournament held at Sligo Tennis Club. There was a large entry with players from all over the country. Frank Owens won the grade 5/6 singles in a tough 3 set battle to take the trophy and title. Bill Twomey and Frank partnered up in the doubles and made the final where they narrowly lost. David Quinn made the final in the grade 3/4 singles, winning four tough rounds but lost out in the final. This was a fair achievement as it was the biggest draw with 32 entrants. Chris Rudland and himself acquitted themselves very well, losing painstakingly 14 -12 in the championship tie break at the quarter final stage. A great weekend was had by all. 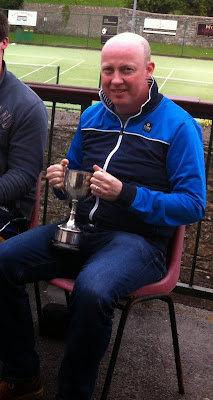 Posted by News from the Clubhouse at 22:31