Q: Was the table quiz a huge a success? A: Yes! 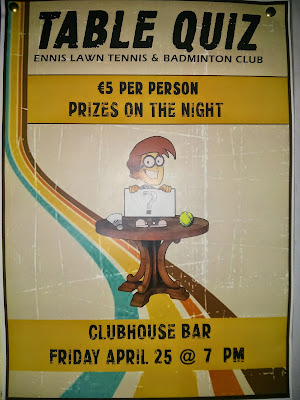 The table quiz was held in the bar last Friday night as the second event in the social calendar. A big thank you to everyone who showed up and made the night a huge success. Once again it was great to see the bar so full of both tennis and Badminton people, both young and old.

Once more we owe it all to Nicola Tassie, Alan Loftus and Aine Jones who organised and ran things on the night. In the end we had to have a tie break to decide the winner with eventual honours going to Team Babuschka, so congratulations to Dave Quinn, Frank Owens, Chris Rudland and Bill Twomey for being smarter than the rest of us. What followed was another late night of music, craic and banter. Thanks again to Frank Jiruse who served and put up with us and our madness.

As we've said before we would love to keep this social boom going, so keep an eye on here for dates and details of upcoming events. Next up will be another social or "Tazmanian Tournament" in the coming weeks so please get hype! :)

Posted by News from the Clubhouse at 21:11

Attention ladies and gentlemen who have signed up for the tennis ladder. Groups have been posted in the bar and it begins from this week on, so get those matches played! Enda Grennan is organising things this time around so if you have any ladder queries just give him a shout.
Posted by News from the Clubhouse at 20:44

A special shoutout and congratulations to Ann Twomey and Feargal O' Dulaing who beat the odds and won the raffle for the Easter eggs. Enjoy the chocolate folks, it should last ye until next year!
Posted by News from the Clubhouse at 20:41

Table Quiz event taking place in the club house on Friday 25th April at 7pm. This will be followed once again
by ceoil & craic. Either choose your own team of 4 people or take part in a lucky dip, where names will randomly drawn.

Entry is €5. Sign-up is ESSENTIAL due to limited space. Sign-up sheet available in bar area of club house.

Posted by News from the Clubhouse at 20:35

Tonight marks the one week anniversary of the first event in the new social club calendar. Firstly, apologies for this post not appearing sooner. This is solely down to the fact that everyone involved in last Friday night have only just recovered.

The Tazmanian tournament saw 10 teams face off in some friendly doubles of all skill levels. It was especially great to see some of the top players in the club out on the court having a laugh with the newer members. From the tennis on display I think it's safe to say there were some surprises on both sides :) There were of course prizes for the winners and in the end those victorious were rewarded with no small amount of chocolate eggs. Once the games were over, those brave and good looking enough gathered on court no.2 to perform a dance for a music video no less! These outstanding individuals can be seen on video during the Ennis Street Festival come July. Shoutouts to Ana Bella Alvarez for organising this portion of the night.

After all the outdoor activities had concluded the entire group retired upstairs to the bar where the real fun began. There was plenty of food on offer, most of it generously home made. Thanks to Ann O' Hanlon the bar was well stocked and a good thing it was too! Also of note was the open speaker system provided by Liam Mockler which allowed anyone to plug in their own music, leading to some very 'interesting' conversation. It was truly a joy to see the bar so full of members young and old all having a great night. Something the social club aims to keep up. I feel special thanks are in order at this time to our wonderful barman, Frank Jiruse, who continued to serve until 4am, even though he had to be up for work again at 7. He is indeed some man for one man, as they say.

This was by no means a one off event and we are looking forward to growing the social side of the club which has been lacking in recent times. Of utmost importance in to try to integrate the tennis and badminton social scenes which are somewhat separate entities at the moment. With the badminton crowd being much more accomplished in this regard.

Of course none of this would be possible without Nicola Tassie, whose drive and commitment created this initiative. It was somewhat embarrassing that it took a relatively new member to come in and shake things up, but I think I speak for us all when I say long may she shake. Her strength both on and off the court are sure to benefit the club in years to come.

Special thanks go out to Alan Loftus, Aine Jones,Frank Jiruse and John MacLaughlin who were invaluable in organising the night.

So with that I'd like to announce that the next event will be a table quiz happening upstairs in the club bar in the coming weeks. Keep an eye on here, the club facebook page or even twitter if that's your thing, for details on that. Also, if you have any questions or ideas, Nicola is now sitting on the committee representing all things social so just seek her out and I'm sure she'd love to hear from you. 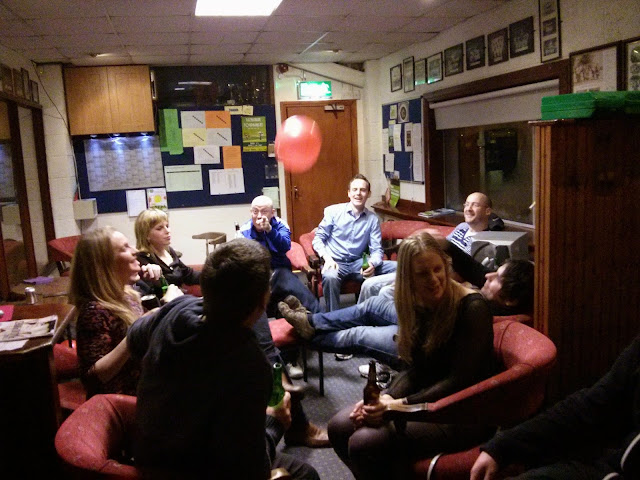 Posted by News from the Clubhouse at 23:22