Ciara Dwyer selected on the Irish U/17 Team 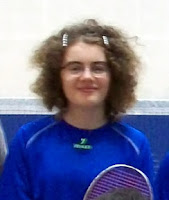 Ciara Dwyer has just been selected on the Irish U17 Badminton Team that will represent Ireland at the Catalunya U17 Open on the 16/17th of Feb. She joins her clubmate Megan Bredin on the trip to Barcelona, and becomes the 14th Junior Badminton International from the Club.

Well done Ciara. A fantastic reward for all your hard work over the years. Best of luck in Barcelona.

Posted by News from the Clubhouse at 19:27

There were 181 entries in the Munster U/13 Closed Div 1 & 2 held in the Sports Arena at the University of Limerick on Sunday 20th January. All the Div.1 finals will be held on March 29th (Good Friday) in Clare along with the finals of the U/15 and U/17 Munster Closed Championships.

Alexandra wins the Treble in the Leinster Open 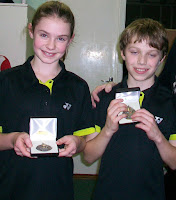 Alexandra Troy had a fantastic weekend when she won the Leinster Open U/11 Singles, Doubles (with Sarah Cherry) and the Mixed with Daniel O'Meara from Killaloe who was also R-Up in the Boys Doubles.


Moya Ryan won the Leinster Open U/15 Mixed with Matthew Lightbody (Lisburn). She was also R-Up in the Singles, where she was narrowly defeated by Kate Frost 21-15, 19-21, 21-19.
Lana Browne and Karen MacNamara were defeated in the Girls U/15 Doubles Semi Final, and Karen was also defeated in the Mixed Semi Final. Brendan Dolan, Brian Meaney and Katie Browne also competed in the U/15.
Posted by News from the Clubhouse at 19:27

I wish you all a very Happy New Year and look forward to seeing you all in 2013 to celebrate our 125th anniversary.

Unfortunately our grant application for renovations to the Club was unsuccessful.  Thanks to Ger Browne and Al Bredin for all their time and work that was spent on this application.

We the committee have decided on the works that need immediate attention.  The following was agreed:-

The improvements will be priced and figures will be presented at an EGM for your approval.

We the committee hope to have all improvements completed for our celebrations in July 2013. On the longer term, plans for further improvements to the tennis courts and lights are on the agenda. 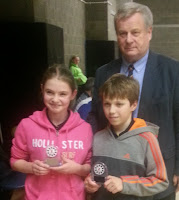 Alexandra Troy won both the U/11 Singles and Mixed in the Ulster Open last weekend. Her partner in the Mixed was Daniel O'Meara from Killaloe who had already won the U/11 Doubles and was a finalist in the Singles. A great weekend for Clare Badminton.
Posted by News from the Clubhouse at 18:17 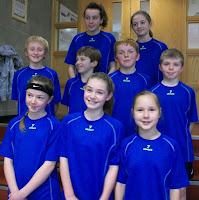 On Thursday 3rd January over 70 juvenile badminton players from Cork, Clare and Connaught converged on the UL Sports Arena in Limerick for a new badminton competition called the South-West Challenge.  Mixed teams in U13, U15 and U17 competed at a high level and provided some very exciting matches. Over 18 Ennis players competed in the tournament.

Posted by News from the Clubhouse at 08:30