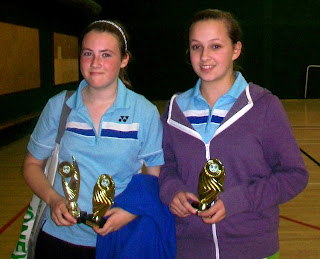 Top seeds Karen MacNamara and Lana Browne won the Sligo Badminton Open U/15 Doubles on Sat 29th September. This was the first tournament of the season and all players were happy to be back in competition. After a a slow start in the earlier rounds Karen and Lana kept their best performance for the final where they were convincing winners.

Karen comleted the double by taking the Mixed Title in style with her Dublin partner. Both girls were narrowly beaten in the semi final stages of the singles.
Ronan Foley reached the final of the boys U/13 doubles with his Ulster partner. Other Ennis players who travelled were Alexandra Troy and Katie Browne who also performed very well in the U/13 tournament.
Posted by News from the Clubhouse at 10:42