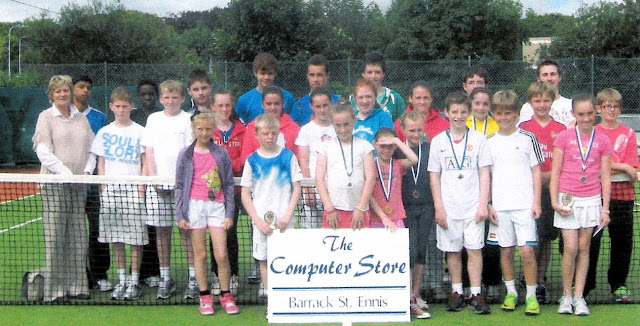 The Junior Tennis Club Championships this year took place from August 15th to 20th. The event featured 9 events ranging from U10 to U18 and featured 35 of the clubs Junior Members. The event was kindly sponsored by the Computer Store. This year, there was a change from the regular knockout style competion - with all events changed to round robin. This meant that all players saw plenty more tennis than in previous years, with a total of 83 matches completed over the course of the five days, and each player got at least two matches. The final results were as follows:

Munster Junior Inter-club Championship:
Ennis have entered a total of three teams into this years Munster Inter-club Championship which is taking place at the moment. The format of both the U12 and U14 competitions places all of the entered teams in into a preliminary round draw, with the winners of each fixture progressing to the Cup Competition, and the Runners Up forming a Plate Competition. This year, both our U12 and U14 teams were handed tough initial draws facing Bishopstown and Sundays Well respectively (both Cork). Both our teams gave spirited performances last weekend, but both Cork teams had enough class to edge past our players. Junior Co-ordinators Jason and Danny Comerford are hoping both teams build on their good performances when both teams face Whitechurch (also Cork) next weekend in the Plate Competition.
Traditionally the U18 event is a much smaller affair, and this year, with only six teams competing in total, the format of the competition is two round robins with the winners of each group to qualify. Ennis opened their account yesterday with a very closely fought encounter away to Limerick Lawn where we just lost out 5-4 in the best of 9 match fixture. Next weekend our team will host Sundays Well.
Posted by News from the Clubhouse at 17:24