Posted by News from the Clubhouse at 22:04 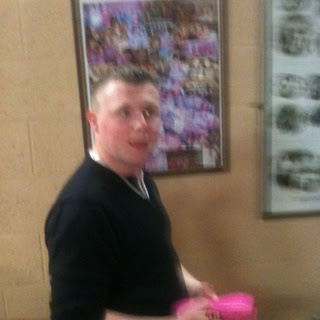 Posted by News from the Clubhouse at 21:23

The 2011 Ennis Tennis Championships concluded on 18th September with a series of great finals. The highlight of the tournament was the performance of  Ennis man and graduate of the club's junior section Robbie Carkill who captured a clean sweep of the 3 A grade titles. It was the first time that he won the A title. On the way he overcame the holder and 3 -time champion Joachim Pintao. The Gents A tournament is the club's blue riband event and Sunday's final  was the 67th occasion that the prestigous Cahill Cup was presented. In the Gents' Doubles Robbie was partnered by fellow Ennis man Dave Clohessy and in the Mixed,  Angela O'Sullivan.The Club's historians estimate that it is twenty years since Carkill's feat was last achieved. It was also Angela's first time to win at that level.

In the Ladies A section Fiona Healy won the Singles for the first time after a close fought final with Alice Twomey. In the Ladies A Doubles Liz Tuohy and Margaret Flanagan saw off Londa Kochhar and Maria Dolan.

There was a terrific range of players on finals day and a notable mix of ages ranging from junior Alice Twomey to veterans Martin Dunne & Colette Fannin.

One of the most popular wins in the Club Championships was the victory of Kevin Starling with Teresa Curtin in the mixed doubles. This was the first time that loyal clubman Kevin achieved success after many close attempts.
Posted by News from the Clubhouse at 11:15

Posted by News from the Clubhouse at 22:39

Posted by News from the Clubhouse at 22:32


Remember,  Sunday 18th  is Club Championships Tennis Finals Day and all members and friends are welcome to come along. The tournament's main sponsor is Tom Mannion Travel


The matches will start midday (schedule not yet to hand) and will continue till late afternoon after which there will be the presentation of prizes and  a buffet. All are welcome to come along and support this important event in the club's calendar.

Three young badminton competitors, Karen and Amy McNamara and Lana Browne, all from Ennis Tennis & Badminton Club, had a very successful trip to the Sligo Open last weekend – the first event of the Juvenile Badminton calendar.  The tournament was well-attended, with players travelling mainly from Ulster, Leinster and, of course, Connaght.

Karen enjoyed a great run in the U13 girls singles event, reaching the final, where she was eventually beaten in 3 sets by Leinster No. 1 Clodagh Dunne (who also beat Lana in the second round).  Karen played some very good badminton to get to the final and she certainly made Clodagh work for her title.

Karen and Lana then teamed up for the U13 girls doubles and made light work of their route through the round-robin stage to reach the semi-final.  This match was a slightly tougher test but the Ennis girls still managed to win it in 2 sets.  Karen and Lana then took on Clodagh Dunne and her partner Katie McGlone in a highly entertaining and very competitive final.  The Ennis girls lost the first set, but stormed through to take the second.  The stage was then set for a very tense third set and, although the Ennis girls looked down and out at one stage, they showed great determination to battle back and eventually take the third set and the title.

Amy McNamara was the sole Ennis competitor in the U17 event where she came up against the very talented Ulster player Victoria Ringland in the girls singles.  Although defeated in 2 sets, Amy played some very good badminton in this match.  In the singles plate event, Amy finished in the runner-up spot, losing out in the plate final to Leinster’s Nora O’Gorman.
Posted by News from the Clubhouse at 10:59

Club Championships on the Web

Club Tennis CaptainKieran Tuohy  is posting the draw and results on this website. Check under Ennis.
Posted by News from the Clubhouse at 19:49

Participants are requested to check the noticeboard to establish when their  matches are scheduled.

Members and friends are most welcome  to come along along to support the club and individual  players. 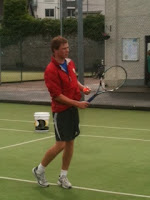 The Gents' Singles event is proving the most competitive. A batch of Under 18 juniors  and younger players  seasoned by a Summer of competitive tennis are proving to be very competitive and more than a match for the slightly older players. Eoin Power made a great start and progressed to the next round. Daniel Foran, in the game of the tournament so far took champion Joachim Pintao to 3 sets before just losing out.

Posted by News from the Clubhouse at 09:04

Posted by News from the Clubhouse at 08:47

Details of Junior Coaching on Saturdays 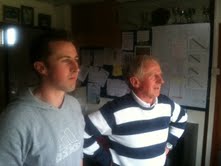 Junior Coaching:
New Autumn term started  on Saturday 3rd Sept. Cost for 8 sessions is €45. Priority will be given to those who participated in the Summer term first, with any additional places being allocated on a first come first served basis thereafter.

The club's Under 18 team  is participating in a round robin in the  Munster Junior Club Championships. Ennis Lost to Sunday's Well last Sunday and play Rushbrooke on Sunday next with a home game on Sunday week agains Limerick Lawn. The team is Alice Twomey, Alison Brogan, Alena Ovcinnikova, Eoin Power, Michael McMahon, Roger Mulcaire